Made in China questions the mercantile and disposable paradigm of objects in conflict with cultural identities. The body of work produced for this project inquires about the wide effects of consumerism and mass production and comments on the loss of cultural identity of indigenous communities from different parts of the world in the hands of ethnocentrism, globalization and industrialization.

This global problem supported by us (consumers), besides devastating the environment, affects everyone but mostly minorities who have been maintaining the cultural heritage and diversity of the world alive.

Made in China started as an ongoing project of handmade Molas, which are unique hand sewn illustrated fiber art pieces made by the Guna women from Colombia and Panamá, their Molas show images of their cosmogony and are used as essential parts of the women's attire. My appropriation of Molas depict common consumer goods usually mass produced in China. This project intends to give awareness about mass production vs hand-made traditional crafts done by indigenous people from around the globe and the value given to fast-making and fast consuming goods vs the devaluation of tradition and environment caused by capitalism and consumerism.

“Thirst” is the first of my appropriations of a Mola, and it tells a story about the indigenous communities suffering because of lack of water  and medical care among other basic needs. In Colombian Guajira, Wayuu children die every day of thirst and malnourishment, while civilized people focus on attaining stuff. Big companies arrive to Colombia offering money to  white collars in order to obtain permits to drill ancestral lands that have been cared for by indigenous communities for centuries  bringing drought to rivers, imbalance to full ecosystems and even killings to indigenous leaders and activists. All for  money that will never replace the environmental nor cultural loss. Indigenous communities from around the globe take care of the planet better than modern individuals, but their human rights are violated too frequently. 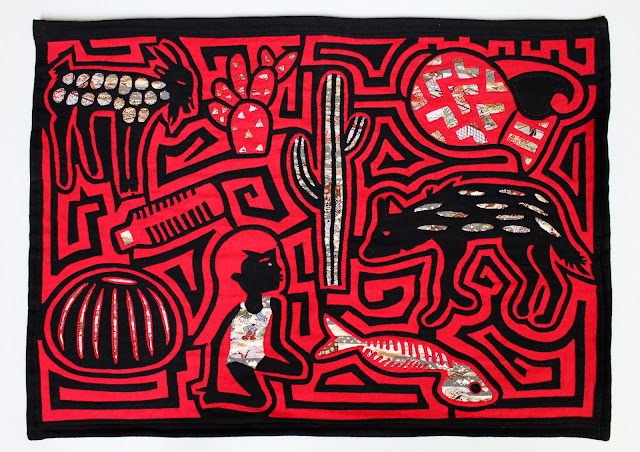 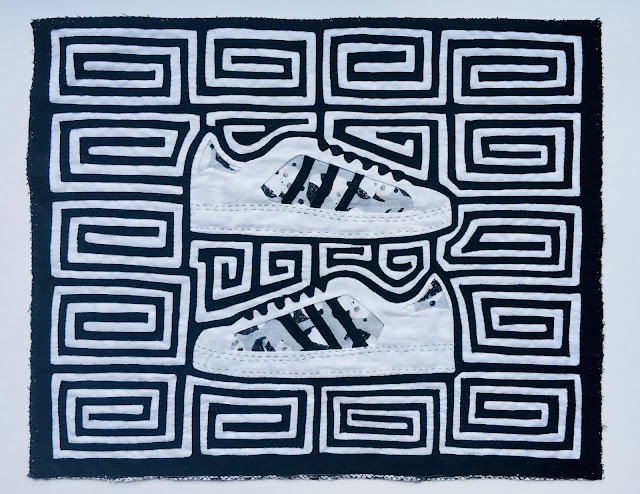 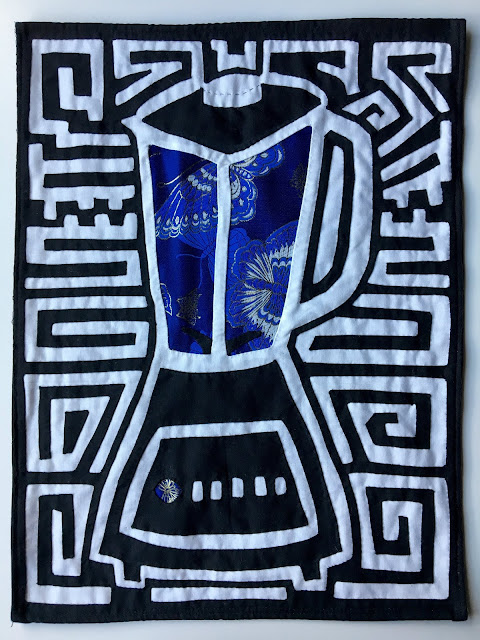 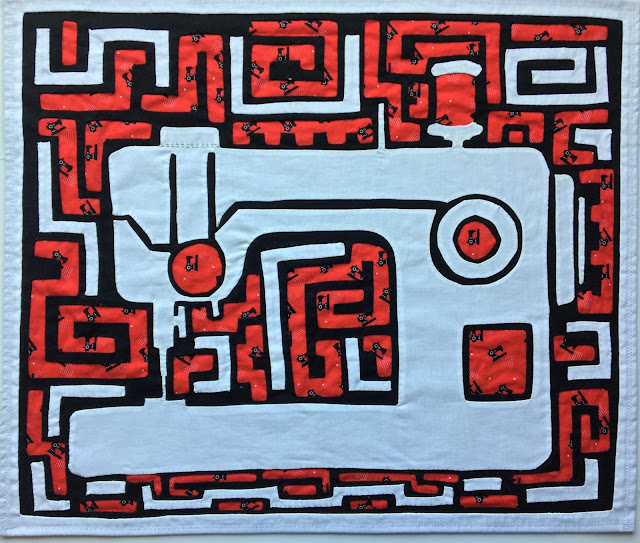 The series Idols was inspired by Pre-hispanic cultures aesthetics and each of the pieces was done with mixed media over repurposed "made in China" toys and appliances that had been disposed by their owners. The finished figures are meant to appear as if they were done in rock which is an everlasting natural material but, the reality is that these idols are fragile and would be very easy to break, revealing the man-made items bellow. Each idol is named in Runasimi, also known as Quechua language which is one of the remaining indigenous languages still spoken in the Andes Mountains since pre colonial times. This series questions the idolatry for consuming and buying things that give us a momentary sense of support as well as bringing awareness of how culture and traditions are being replaced by ephemeral stuff.

Employee of the Month is a series portraying photos of employees of a diner called "Hamburger World", which is the typical food place to eat for the common people in the U.S. The employees I chose are immigrants from different places of the world, and I painted them with the traditional outfit of the culture they belong to. The aim of my wok is to question the viewer about who is serving us, who is working out there and living beside us. I want to bring conscience to the people of capitalistic countries; we need to start appreciating the cultural background of everyone, not only by going to a museum or by eating their food; by embracing the differences of others and making them feel proud of who they are. It is sad for me that a lot of cultures and traditions are lost when people are displaced either by wars or to find better opportunities, immigrants need to leave their culture aside and convert to the new culture in order to belong and to adapt, and in that process a cultural treasure is lost.

To me living in the U.S has open a new point of view about cultural diversity. I have come to the conclusion that in the academic world diversity is well apreciated while in reality people fight everyday to have uniformed social circles and lives. In theory it is awesome to be able to live in the same city with people from all over the world but, where are they? how come we don't see them unless their racial features are different? The common assumption is that everyone should be equal, speak English, have similar fashion trends and behave in a certain way in public places. Beyond that, no one cares who you are or where you come from, they don't care to know about your culture or customs. We live in a country in which the majority of the population is composed of foreigners or come from an immigrant family, but this is not evident to the eye as everyone is trying to adapt and belong. A lot of immigrants want to belong so much that they rather hide or dismiss their roots, than to validate themselves as who they are and endure difficult social encounters. As an Art teacher of a Middle School I have seen tons of hispanic children denying they speak Spanish in front of their peers just because they feel they are going to be rejected if they do. I have observed this behavior in adults as well,  I have spoken in Spanish to people I know speak Spanish because of their accents and they get angry and respond in English, is as if once they learn to speak English they want to prove it to the world. I don't blame them, I have not lived what they have; I blame this type of society who doesn't admire social differences unless it is for their amusement or profit. 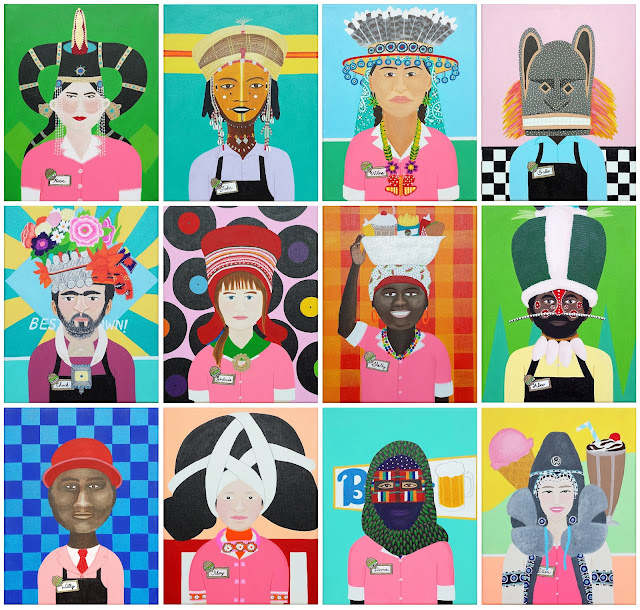 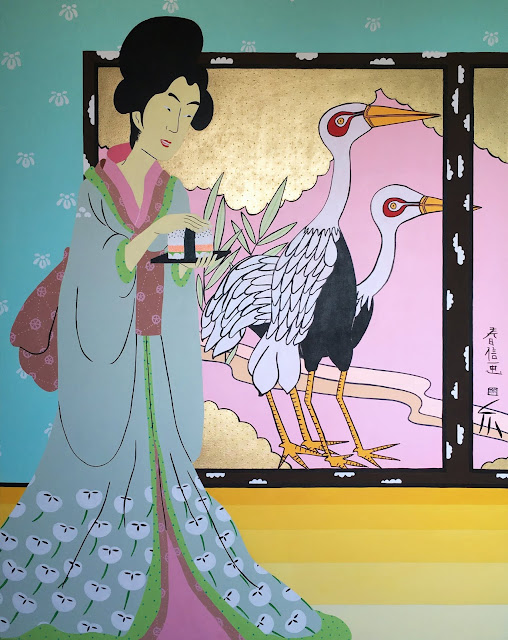 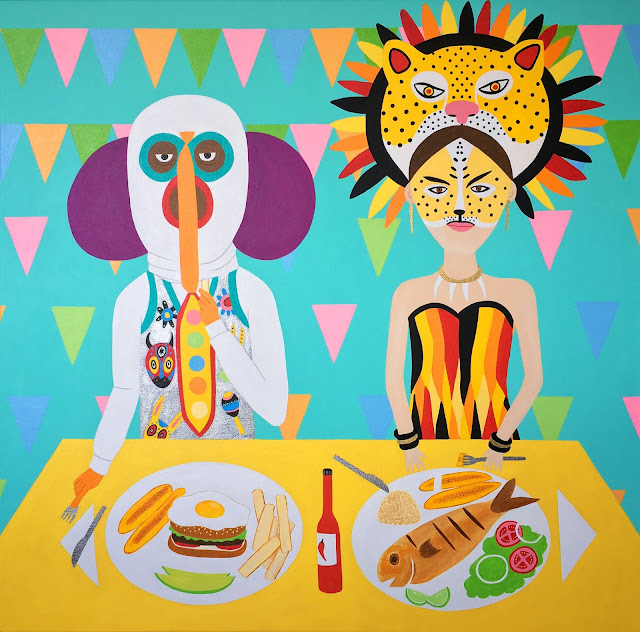 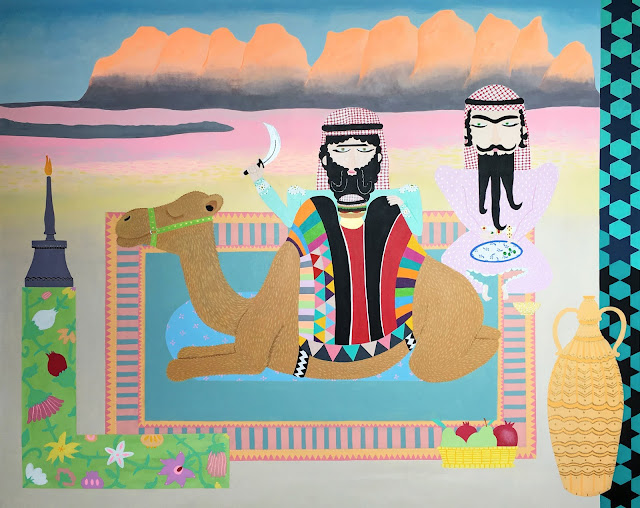 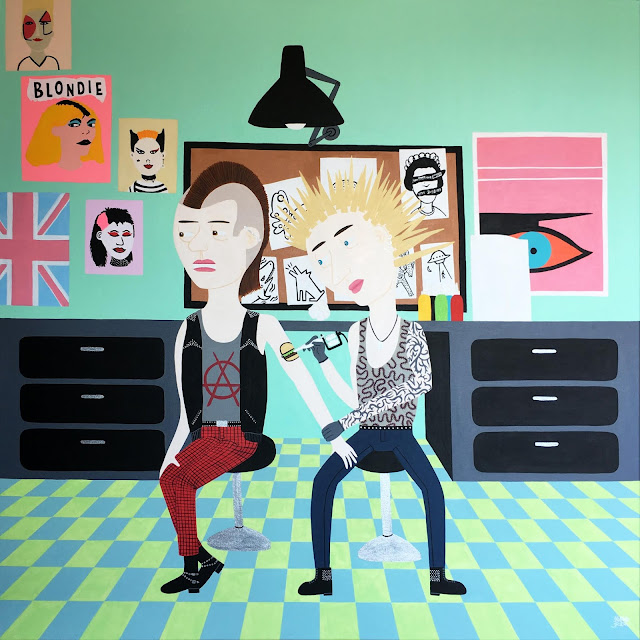 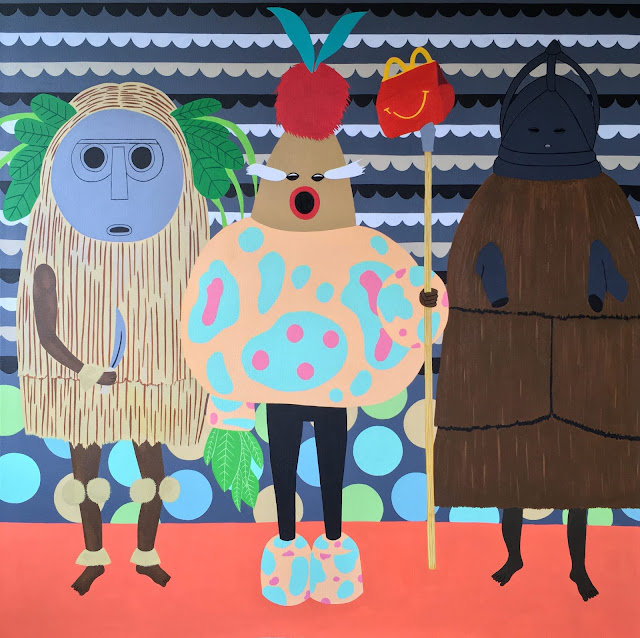 
The following pieces were done before starting with this series, but the concept I worked there is related to consumerism and industrialization in the U.S, which is very pertinent to what I am trying to talk about in the "American Dream Catchers" pieces.

This series of rugs questions the encounter between tradition and industrialization, between nature and chemistry. Flying Carpets are part of old legends but even though these legends are fiction, in the present could be closer to become real. In the past no one could ever believe it was possible to fly over a carpet, today it would be easier to make a flying rug and people would not be that amazed.

Today there are a lot of ways to travel, including hallucinogens such as LSD, which people commonly call "Trips", or refers to the experience as "to travel in acids". But isn't it better to travel to marvelous places even if it takes more time? With the arriving of each new technology something that was part of our history is disposed. Every day life is more centered in the immediateness of things and how to make everything easier, and faster. These rugs were hand woven with a latch hook, to reinstate the importance of tradition and a slow process, each one represents an LSD sheet which always comes divided in grids over and illustration that alludes to the name of the "Trip" or acid.

The original title in Spanish of each rug is a word game between "Acido" which means (Acid) and "Has ido" or "Has sido" which both mean (Have you been).

The Patrioskas should be the most known Colombian Craft for exportation. These are appropriations of Russian Matrioshkas (nesting dolls that fit one inside the other), but bullet shaped and painted like our most known politicians; some known by their violent behaviors, some as murderers or drug patrons, and others known as martyrs killed fighting for freedom, or for the truth that they believed in. The legitimate Patrioskas should be shaped in lathe by a prisoner of one of our high security jails. These series were shaped by a prisoner known as "Rojas the Colombia Lathe Shaper", Colombia being the patio were he was confined at "Casa Blanca", prison located at Villavicencio, Colombia.

Balas Perdidas - Lost Bullets
As with most of goods, there are bootlegs and legitimate ones; this series called "Lost Bullets" is considered a bootleg of Patrioskas, as it was not shaped by a prisoner but by an artisan called Luis Rodríguez based in Ráquira, Colombia. The characters depicted in these series are related to Colombian politics as well, but somehow have a weird story: actors in politics, clowns in politics, literally being lost for years because of being kidnapped, mercenaries, or sneaking into foreign foreign governments to be found every where as Waldo or Wally, wait, both are the same person.


Bombas - Bombs
Bomb were made as a bootleg Patrioska too. The ceramic work was made by Luis Rodríguez and the political characters I depicted were chosen simply for their known fatness, besides fitting the profile of bombs. The Rodríguez - Orejuela brothers were known drug lords during the 80's and early 90's until they were captured. Fat Fabiola is a stand-up comedian who got into politics, only an example of embarrassing elections that my fellow citizens make. And Álvaro García Romero, was the first "parapolitico" to be captured, these are white collar thugs who uses the government money to finance paramilitary groups. 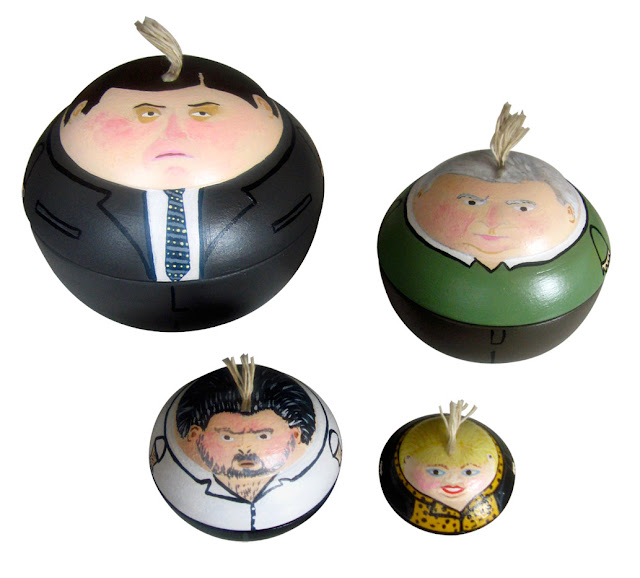 Vestidos para matar - Dressed to Kill
The characters in the set "Dressed to Kill" are generic types of thugs more than known real life persons. This is the last of the sets I made for bootleg Patrioskas. I wanted to depict the different types of thugs that are commonly known, choosing their size by hierarchy of power among society, or representing how big of a threat they are with their size. From small to big: Street Robber, Femme Fatale, Hitman, Serial Killer, Druglord and White Collar. 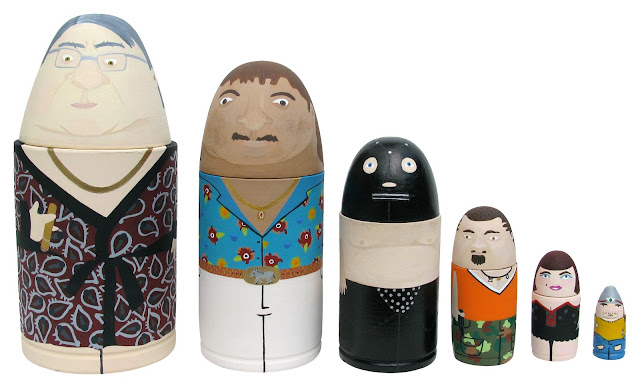